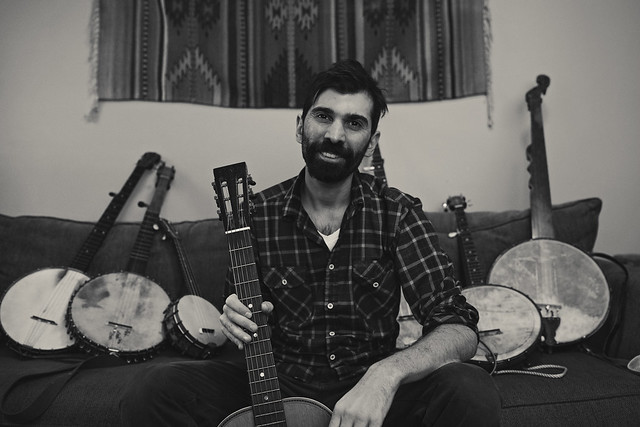 Eli Smith is a folk singer, banjo player and guitarist who grew up in New York’s Greenwich Village.  Smith has recorded for Smithsonian Folkways Recordings and regularly performs as a solo musician and with the string band the Down Hill Strugglers.

Eli has performed and recorded with John Cohen (New Lost City Ramblers) and Peter Stampfel (The Holy Modal Rounders and The Fugs), and has opened for songwriters Patti Smith and Steve Earle.  He can be heard singing "The Roving Gambler" on the soundtrack to the Coen Brothers film Inside Llewyn Davis.  Eli Smith has performed at festivals and venues including the Kennedy Center, Library of Congress, Newport Folk Festival, Vancouver Folk Festival, The Jalopy Theatre and many more.

Eli is also a music producer, currently heading the annual Brooklyn Folk Festival and Washington Square Park Folk Festival and has curated releases of historic archival recordings, including the Harry Smith B-Sides for Dust-to-Digital and numerous albums for Jalopy Records.
Eli Smith served as Traditional Music Consultant for the video game Red Dead Redemption 2 from Rockstar Games and can be seen playing a roller skating fiddler in the film "Tesla" with Ethan Hawke.  Smith also hosts the Down Home Radio Show podcast, which is available at www.DownHomeRadioShow.com.

"Eli Smith is one of the most vital figures in the new revival of traditional American music - not hipster Americana, not navel-gazing songwritery, but homemade, heartfelt old-time music with a deep sense of history, community, and the pleasures of good picking and singing."
- Elijah Wald

"Eli has found resonance with the intensity of rural music, while delighting in the nuances that preserve the individual uniqueness of the genre.  He is a rare, special person because he’s the only one of his age who knows about the old concerns of the folklorists and the ethnomusicologists. He knows about the politics of it. He respects that history.”
- John Cohen


Here are some articles about Eli Smith in: